In the hands of women: A reflection on the gender gap in financial inclusion

Did you ever wonder why there is not an International Men’s Day? There actually is such a day, by the way—it’s on November 19th, but there aren’t too many people marking it with a night off from cooking or cleaning or childcare for the guys!

The reason we celebrate International Women’s Day on March 8th each year, is that the other 364 days look quite a bit like men’s days. In fact, globally, women spend an average of 4.5 hours a day on unpaid work, while men spend less than half that much time—and the unpaid labor gap is particularly large in developing countries. We are a long way from Planet 50:50 or gender parity. Indeed, the World Economic Forum predicts that the gender gap will not be closed until 2133.

This lack of parity manifests itself in many ways, including gaps in education, employment, and wages, and in the board room and public high office. And access to finance is no different.

While globally ownership of accounts is on the rise, the gender gap persists at in developing countries, with the majority of the 2 billion globally without access to finance being women. We should not simply conclude that women do not want accounts—just as we cannot suppose that they do not want more education, the opportunity for gainful employment, or equal wages for equal work. We know that women living in a cash-only economy do not have adequate control over their finances, do not have the confidentiality they need to save and borrow and can only make or receive payments at others’ convenience, not their own. Wouldn’t a more plausible conclusion regarding the gender gap in financial inclusion be that women face barriers that men do not encounter in accessing financial services? Let’s explore this idea a bit further.

Traditionally, financial services have been offered by banks through their branches or automated teller machines. In many countries, women have less mobility than men, either due to their childcare and other unpaid work responsibilities or because culturally or religiously it was not accepted for women to travel without a male relative to places where they could make financial transactions. Technology solutions have provided new opportunities for women to overcome some of the barriers they face in accessing financial services. One such example is the use of mobile phones for making and receiving payments, storing value, and even building a financial history upon which credit may be granted.

females do not own mobile phones

And yet, women have lower ownership of mobile phones than men, compromising the convenience and, more importantly, the privacy, of making financial transactions using mobile money. GSMA’s 2015 report on gender parity and mobile phone access and usage in low and middle-income countries found that over 1.7 billion females do not own mobile phones. In fact, women on average are 14 per cent less likely to own a mobile phone than men. This figure rises to 38 percent in South Asia. Worse, in some places, such as the village of Suraj in the Indian state of Gujarat, local authorities recently took the unsettling step of banning mobile phones for unmarried women, fining women Rs 2,100 for using or owning a mobile phone (there’s also a reward for reporting women who use them).

Without mobile phones, women cannot access the many digital financial services on offer that would help them gain financial security through formal financial sector services. As a G20 report co-authored by the Better Than Cash Alliance, World Bank, Bill & Melinda Gates Foundation, and Women’s World Banking points out, women may not have access to a mobile phone and, even if they do, they may not be able to use it to make digital transactions, due to lack of confidentiality if they do not own the phone or SIM card, or due to limited technological capacity or financial literacy to use the service.

Addressing the persistent gender gap in financial services will require more than a closer look at the design and delivery of financial services. Women face a number of legal and cultural impediments to greater financial inclusion. In some countries, laws require a man to sign for a woman to open an account while in others men must authorize domestic money transactions. In other countries, land and sometimes other assets, which are often required as collateral for a loan, must be held in the man’s name. In cases where the law has changed, customary practices may continue, whether due to lack of information about the change, or persistent cultural norms. Even the well intentioned efforts of some governments to broaden financial inclusion with their “one household, one account” schemes, are likely to contribute to a worsening of the gender gap in account ownership and to potentially negative effects on their economic empowerment.

The United Nations Capital Development Fund, in partnership with UN Women, is setting up an initiative to bring down the barriers impeding women’s access to financial services, whether those barriers be cultural, legal, or economic. It will do so by examining ways to empower women as consumers, household managers, employees, and entrepreneurs. It will serve as a hub to expand the range of UNCDF’s existing financial inclusion interventions for women. With financial inclusion recognized as a key enabler of seven of the Sustainable Development Goals, this initiative hopes to contribute substantially to the enhancement of women’s economic empowerment.

It will be one step towards making every day Women’s Day. 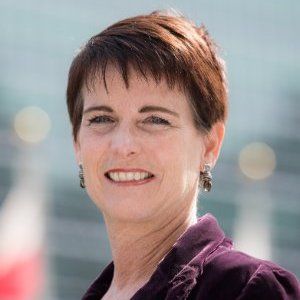 Ms. Porter has two decades of experience in financial inclusion in 30 countries in Africa, Asia and Latin America. At UNCDF she provides policy guidance and support to the global team on financial inclusion. She previously directed an initiative at Making Cents International to build institutional capabilities in youth-inclusive financial services. As Vice President at Freedom from Hunger, Ms. Porter led program strategy and managed delivery of integrated microfinance services worldwide. Ms. Porter has provided technical assistance and training in strategic planning, organizational effectiveness, and product design, and is experienced in program appraisal, design and evaluation. Ms. Porter is on the boards of the SEEP Network, Bolivian MFI CRECER, SMART Campaign, Child and Youth Finance International, and YFS-Link, and was a founder of Women Advancing Microfinance International. Ms. Porter holds a Master’s Degree from The Johns Hopkins School of Advanced International Studies and a Bachelor’s degree from Stanford University. She speaks English, French, and Spanish.