Rwanda’s impressive economic and social record in recent decades has become one of the success stories of modern African development.

The country’s improved record has been both accompanied and supported by an ambitious tax digitalization agenda and effective implementation of reforms.

Central to this progress is Vision 2020, the Rwandan government’s reform roadmap which aimed, among other goals, “to reduce [aid] dependency [by developing] effective strategies to expand the tax base.” The Rwanda Revenue Authority (RRA), the national entity responsible for all tax collection, has invested heavily in digital tax services to drive this vision. RRA has prioritized the simplification of tax forms and processes, providing greater convenience for taxpayers while using third-party systems to gather data for a robust and efficient process.

Combined with tax reforms, these investments have delivered strong initial results, including a meaningful increase in Rwanda’s tax-to-GDP and a dramatic increase in the country’s position in the World Bank’s Ease of Doing Business index, particularly in the area of ‘paying taxes.’ Key achievements, along with lessons from Rwanda’s tax digitalization journey, are outlined below.

As in all countries, there is more work to be done to expand digitalization to fully realize its benefits for RRA, the Rwandan government and the people of Rwanda. This paper suggests pathways forward to help realize these benefits, with specific recommendations. 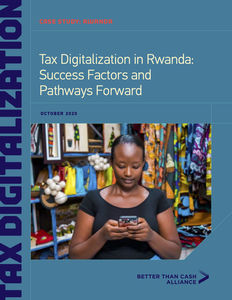